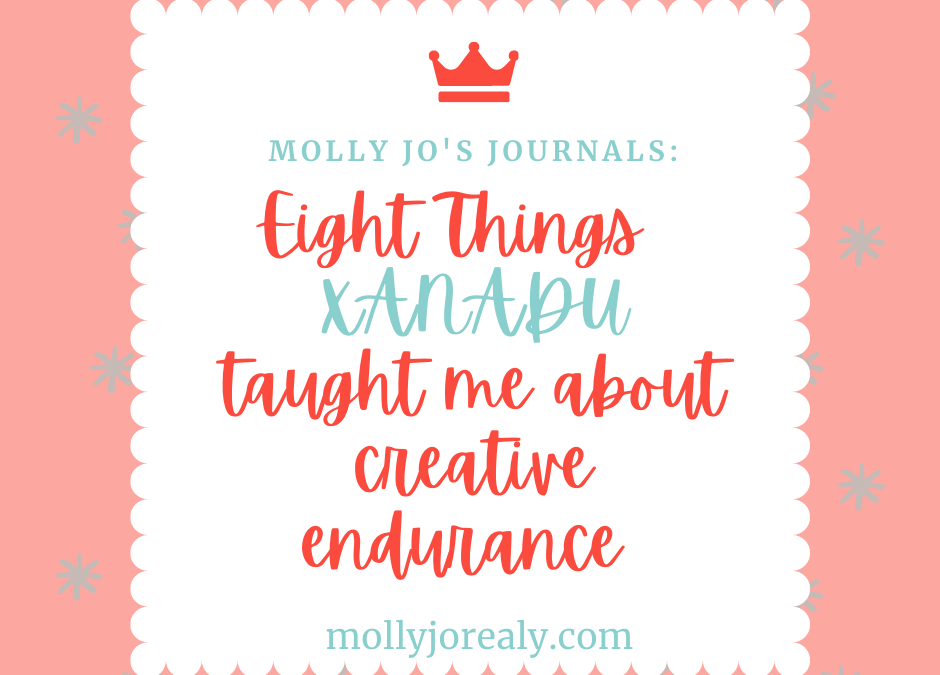 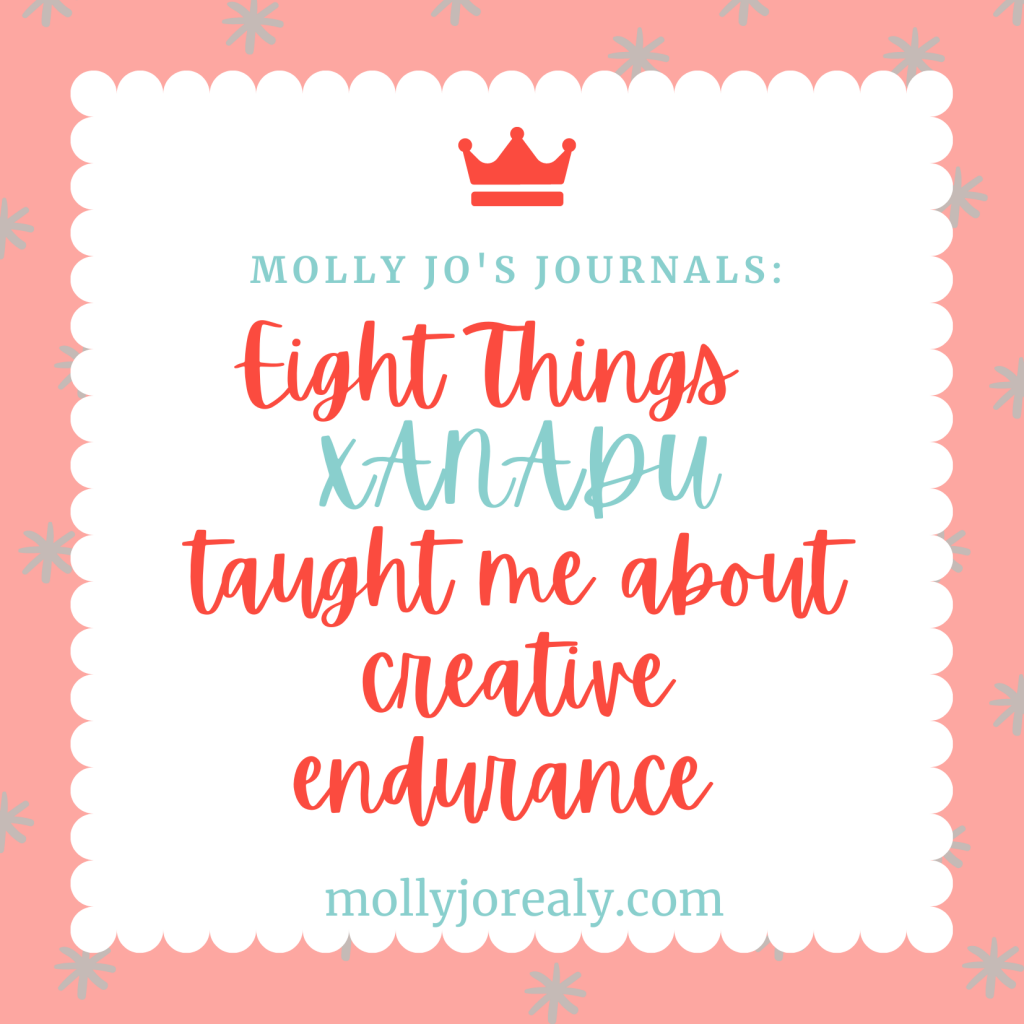 Eight Things XANADU Taught Me About Creative Endurance
(or, A Writer’s Review of a 40-Year-Old Movie a Lot of People Don’t Care About Anymore But Should)

Before I get into the meat of the message, that is, before I make a few edits and share mostly what I shared two years ago, I have to say this. As I’m sipping on my sweet tea (for realz!) and watching XANADU (#truestory!), I’m a little (happily!) overwhelmed with how things have come full circle yet again.

XANADU, in the past three years, has become one of my New Year’s Eve go-to movies (along with the Poseidon Adventure, but that’s a different post). It’s fun, uplifting, and I don’t care if the neighbors see me dancing like a mad woman in my living room as I watch it. Hey, they’re outside setting off fireworks as I write this, so I don’t think they’re really paying attention to me. But you are, right? Aww, thanks. I appreciate that.

Anyway, it’s been a year, yah? And like so many people, one of my not-official resolutions is to finish what I start. The B-part is “if it’s worth finishing.” Again, that’s for another post. Soooo … instead of just listening to music earlier today, I decided to put on a podcast. Thing is, the writing podcasts that I listen to are the kind that make me stop multitasking. And I needed to multitask. So I decided to listen to Follinglo. It’s an amazing true story of a military plane crash, a family farm, the aftermath, and all the ways God’s hand was in every aspect. And guess what ~ it’s by my friend and media guru, Jenn from Mixtus Media. Read on to find why that’s part of this full circle circumstance.

Oh. The original posting of this article had nine things XANADU taught me about creative endurance. So, I guess, technically, I should share all nine with you. That means you get eight plus the bonus. Ya ready? Here it is:

Support comes from many sources.

There’s a phrase in the industry: Street Team. These are the people, personal and professional, who believe in you and want to help you succeed. They read your books, leave reviews, attend author events, give encouragement. Think of it as a positive posse. (I call y’all my Swarm, and you can join on Facebook by clicking here: NOLA Swarm.) In XANADU, Sonny’s Swarm starts when he meets Danny McGuire, the clarinet-playing old-timer (Gene Kelly ~ swoon!), and then Kira (Olivia Newton-John), one of Zues’s nine daughters, or muses. Each contributes something different to Sonny’s life, but both believe in him even when he doesn’t believe in himself. They swarm to his side, along with his other friends and former coworkers.

And now, for the main event:

I really don’t know how the topic started. I was at a marketing conference, and two friends were talking about music by ELO and the movie XANADU. Jenn asked, “Do you remember that movie?”

“Remember it?” I gasped. And then explained how just the day before I was rocking out in the elevator to the song “Whenever You’re Away From Me.” I know that’s hard to believe, but it’s a #truestory. [And here’s where I’m betting Beckie Lindsey’s a little glad she wasn’t on this trip with me, given her introversion and my propensity to ignore that part of her comfort zone. That’s okay, Beckie. You know I still love you!]

Fast-forward to after the conference and some well-discussed Facebook posts and YouTube videos, and now the Blu-Ray is on a repetitive loop for the rest of the night.

Shameless Admission:
I sing each song out loud, each time.
Loudly.

Because I still know the soundtrack to XANADU by heart.

XANADU got me thinking about my own creativity. I know. That’s a really weird thing to write. Because y’all know I’m inspired by sweet tea and Hemingway and O’Connor and peacocks and Van Morrison and frogs and zebras. None of which are in this 1980 roller-skating fantasy world (unless you count the disco outfits. But I’d really rather not.).

Anyway . . . Besides reclaiming my youth and the let-it-loose elevator vocals, here are eight things XANADU taught me about being creative. I invite you to join the discussion.

8. Taking care of business does not mean you’re a creative failure. The movie opens with Sonny Malone (Michael Beck) returning to his job as a studio painter: he enlarges album covers for display in store fronts. He had walked away from this job to pursue his dream of becoming a “real” artist, but it didn’t work out. Once the pressure was on, the creativity was off. But Sonny was always a “real” artist. It was doing it full-time that shook his boots. So he goes back to what he knows. Not as a failure (although for a time he thought so). His day job is a safe place where he can continue to hone his skills and bounce creative ideas off his team. [Note: I don’t recommend talking smack to your boss unless you have that sort of banter relationship. Definitely don’t encourage him to fire you unless you’re ready to walk.]

7. Practice makes perfect. Sonny’s dream is to be a renowned artist. So whatever he’s doing, he practices. At work, he gets into trouble by spending too much attention to detail. He takes odd jobs where he can get them. He’s painted walls, vans, canvases. He never stops painting. So even if it’s not how he wants to do it, at least he is doing what he wants. And he keeps at it. He keeps getting better.

And, even though he wants us to think he’s given up, he never really does.

6. Changing directions is not the same as stopping. His budding friendship with Danny and encouragement from Kira influence Sonny to co-own a night-club/disco/roller-skate hall with Danny. Through a lot of hard work, they find the perfect place: an abandoned building Kira likes to find her solace in. Sonny gets to transition his creativity to design the aesthetics of the club. But he doesn’t let it get in the way of his passion for painting.

5. Don’t discount what you don’t understand. Kira takes human form when she and her eight muse-sisters releas themselves from a city mural. She knows her mission, and she fills it with great joy: She skates (yes, skates. Hey, the movie was made in 1980, okay?) up to Sonny, gently kisses him, and vanishes. Later in the movie, she admits to Sonny she’s not had human feelings before, and this love-thing is messy and painful. Sonny doesn’t believe her, of course. And when she returns to Zeus, it takes a pep talk from Danny for Sonny to go in search of her. He knows he needs her, even if he doesn’t understand where she came from. He finds a way to find her.

4. Don’t limit yourself to what others say. Sonny’s boss tells him to stop being creative. Just do what was expected of him. But Sonny isn’t built that way. He can’t color inside the lines all day, every day. Kira awakens that creativity in him again, and he again finds the passion to create more than album covers. When Kira leaves, it’s impossible by earthly standards for him to reach her. But he stops listening to the laws of nature, and listens instead to his inner self. He always knew he could succeed. And now that he’s aware again, he also knows he needs Kira. And he does whatever it takes to find her ~ even going outside the world of logic.

Because creativity knows no bounds.

3. Go to the source. But the rules of the gods hold Kira with Zeus, and he can’t, or won’t, let her go back to earth. I mean, sure, it’s pretty impressive that Sonny doesn’t smash into bits when he skates full-force toward the mural of Kira and her sisters. But love doesn’t conquer everything. Sonny pleads his case, but has to leave without Kira. Everyone’s hearts are breaking. The point is, Sonny doesn’t stop until there is nowhere else to go.

2. Not seeing is still believing. Sonny is without Kira. He is without his muse, his love. He could still be a creative. He just doesn’t want to. What Sonny doesn’t know, is that Zeus and his wife, Hera, are having a conversation of their own. They see the good in Sonny, and how Kira makes him better. They see how being without Sonny makes Kira sad. She is no longer capable of being an inspiring muse. And, remembering from long ago (or was it just a few minutes?), what true love is, they give Kira back to Sonny. Only he just doesn’t know it yet.

1. Change with the times. Okay, can we break for a minute and just talk about the fashion in this movie? And the weird, NuWave neon-clad characters? How did anyone think Gene Kelly in a bright Zoot Suit was an awesome idea, if even for just a moment? My point is, peeps,

the visuals would not be the same if the movie was made today. But the message is.

Sonny’s dream is to be a painter. Throughout the movie, he achieves that, in different stages. Danny’s dream is to feel needed. He thinks he missed out on love. But being needed and being loved isn’t the same thing; it isn’t only romantic. And Kira? She just wants to inspire people. In the end, she does so much more. And she does it so well, she is given the freedom to stay.

What do you think?
I’d love to hear from you: Leave a comment below and tell me what movies still inspire your creativity. 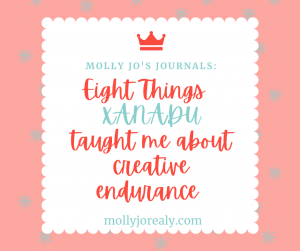 Author of the romantic location mystery novel, NOLA, Molly Jo Realy is an award-winning writer and author coach. Known as the Bohemian Hurricane, she encourages people to embrace their unique talents to come alive and stay wild every day. Addicted to cats, coffee, and pens in no particular order.

Do you have a story in you? Get the Book Builder Binder now to create, curate, and keep all your story-writing ideas!